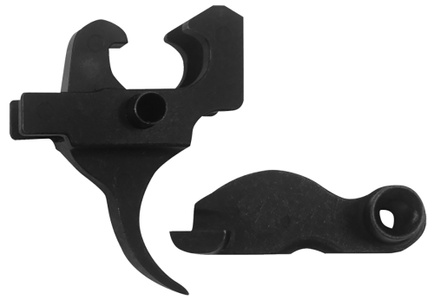 The RAK-1 is an American-made single-stage trigger group with machined release surfaces that offer a smooth and consistent trigger pull unlike anything you will find on standard AK triggers. The top profile of the hammer has been optimized to eliminate bolt carrier hang up and provides a smoother operation without the need of polishing the hammer. The trigger uses a double hook design with an innovative relief cut which allows it to be used in receivers designed to only accept single hook triggers. This gives the operator the option to have the strength and control of a double hook trigger in firearms originally designed to only accept single hook triggers. The disconnector has also been enhanced to eliminate tripper slap and "folding" of the engagement surface during high round count tests. The RAK-1 Enhanced Trigger Group has been properly heat-treated and hardened to minimize wear and passed a 15,000 round endurance test. Each trigger group includes a hammer, trigger, and disconnector which count as three U.S. 922r compliant parts, as well as a hammer spring, disconnector spring, and a trigger sleeve which allows the trigger/disconnector to be pre-assembled before dropping into the rifle.